For centuries, inhabitants of the picturesque coastal town of Mutriku have drawn from the ocean’s riches. Now they’re harnessing its immense power.

The Basque town of Mutriku owes its soul to the sea. It sits wedged into a bay carved out of the rugged, steep cliffs of Spain’s northern coast, roughly 50km north-east of Bilbao. The coastline here is a geological marvel, created by powerful storms and relentless waves that left behind flowing, jagged layers of fine shale known as flysch that stretch out into the ocean like pages of an ancient book.

For centuries, the same ocean has enriched residents of this coastal town. Formed as a fishing village more than 800 years ago, Mutriku grew alongside Basque commerce through the Middle Ages to become a thriving port, home to generations of fisherfolk, traders, shipbuilders and whalers. Sailors from Mutriku ventured as far as the Gulf of St Lawrence to hunt seals, whales and cod. The products they brought back fuelled leather industries in Mutriku and across Europe. Mutriku’s whalers were such renowned experts that as early as the 13th Century, the Spanish crown demanded a whale from the town as an annual tribute.

Mutriku is “one of the best-preserved medieval towns in the Basque Country and its entire history has been linked to the sea,” said Violeta Bandrés, a guide at the Mutriku Tourism Office. “It is a history of fishermen, navigators, sailors; men and women whose lives unfolded in this environment.” 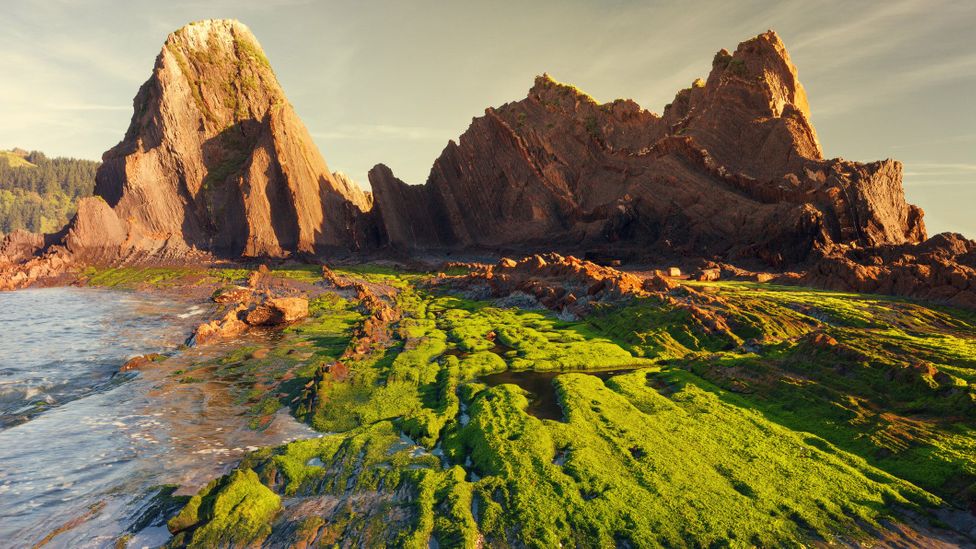 From the sea wall at the mouth of the bay, I watched as a team of rowers, lined up in a trainera (a streamlined sporting boat once used to hunt fish and whales), powered out of the port into the glistening Cantabrian Sea, past criss-crossing jet skis and a yacht sailing lazily back into harbour. Families splashed around in natural tidal pools, cooling off from the midday heat. But while the ocean remains a source of pleasure and income for locals, it’s now serving a new purpose: as an immense source of power.

In 2011, the town installed the Mutriku Wave Energy Plant, the first commercial wave power plant in Europe. Harnessing the force of the waves, the plant’s 16 turbines generate up to 296 kilowatts of electricity, enough to power around 250 homes and cut 600 tonnes of carbon emissions each year. In 2020, the plant hit a major milestone, producing two gigawatts of cumulative electricity, a record for any wave plant and an example of the role marine power could play in the global transition towards clean energy.

I was in Mutriku to find out more about this latest chapter in the Basques’ long and prosperous history with the ocean. As I walked through the town, an M C Escher-like maze of stone stairways and zig-zagging narrow cobbled streets, I found mementos of the town’s distinguished seafaring past scattered throughout – many of them open to public viewing.

At the corner of one street was an 18th-Century Baroque mansion built by José Montalivet y Forjado, a famous captain and naval engineer. In the town square stood a statue of Cosme Damián Churruca y Elorza, an admiral of the Spanish Armada who died fighting in the Battle of Trafalgar. (A painting depicting his death is on display in Madrid’s Prado Museum). Tucked along a residential street, I passed the stone façade of the Arrietakua Palace, once home to the ship builder Antonio de Gaztañeta, whose designs revolutionised the Spanish fleet. Down a steep street leading down to the sea, I reached the gothic arches of the Antigua Lonja, an old fish market standing at the edge of the harbour just as it did in the 15th Century. 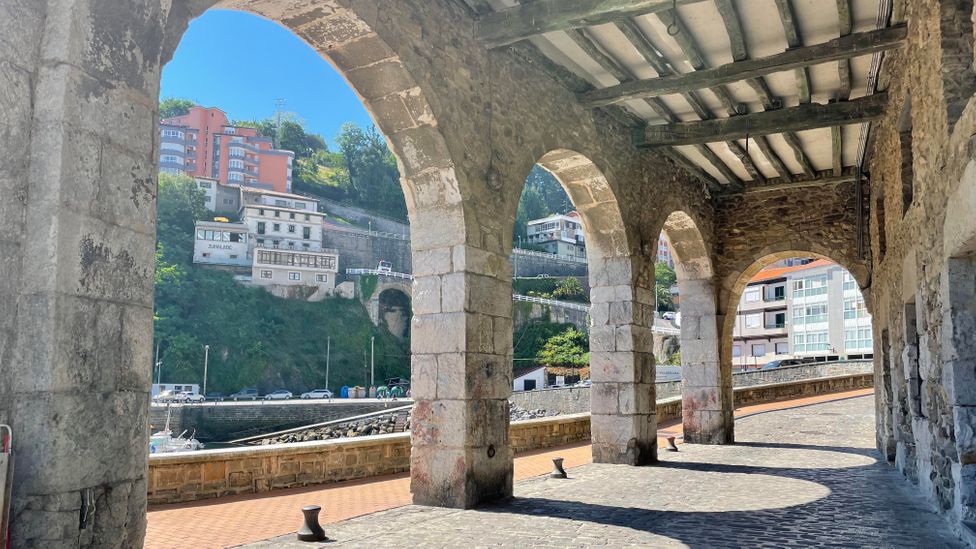 Hundreds of years of architectural tinkering have created a town that exists in harmony with the sea. The port’s original design (known as “The Seashell”) was innovative for the 13th Century, with two stone breakwaters protecting incoming ships from the choppy seas. An overhaul in the late 19th Century gave the port its current layout, and a Basque engineer tweaked the walls in 1932 to better protect the town against incoming waves. Large fishing vessels of the past have mostly disappeared; today the marina is filled with rows of small white sailing boats bobbing in the breeze.

Walking out further, I passed the town’s two natural tidal pools that fill up with seawater and grateful swimmers on hot summer days. At the end of the port, stretching out to sea was another breakwater, a 440m-long Brutalist wall of concrete and stone that arced out like a protective arm across the bay. It was built to shield the town from storms and strong ocean currents, but spotting an opportunity to gain something further from the sea, the Basque government built the wave energy plant inside.

Mutrikuarra (inhabitants of Mutriku) call it “El Drágon” (The Dragon), and when the waves hit and the turbines roar, it’s easy to hear why. I was greeted outside the plant by Jon Lekube, an engineer at Ente Vasco de la Energía (EVE) who’s in charge of running it. We headed up to the top of the breakwater and stood looking out to sea as waves rolled in steadily from the north. “Today we have waves around 1m high,” Lekube said. “But we can have up to five or six.”

Even on this relatively calm day, as we talked a deep groaning sound rose up through the stone below. The dragon was waking. We headed down the stairs towards a pair of steel doors guarding the entrance to the plant, and Lekube handed me a pair of ear defenders. “If you’ve got any questions, you might want to ask them now,” he said, smiling. I put them on, as we stepped inside to a deafening roar. 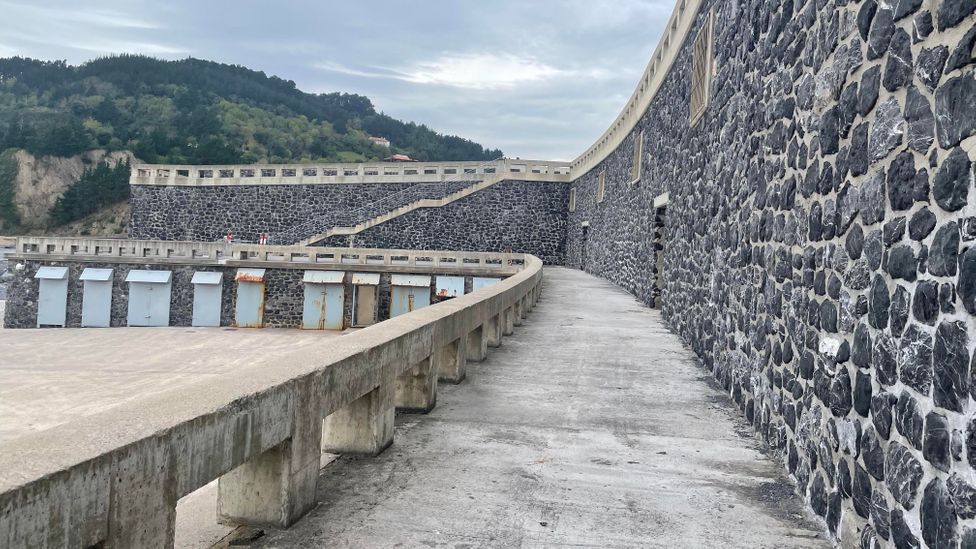 The system is designed to get as much from the waves that batter the coast while protecting the turbines from the corrosive effects of the sea water. When a wave arrives, it compresses air upwards through chambers that rise up from below the waterline into the belly of the structure. The high-pressure air drives a turbine, generating electricity that is fed straight into the grid. As the wave falls away, it drags air back through the turbine, creating more electricity on the way out.

We walked around the concrete interior of the plant as it filled with an orchestra of sound. Crashing waves met with haunting growls from the turbines, followed by the high-pitched whistles of pressurised air. Some spray spat out of one of the chambers – even though the design offers some protection, there is no escaping the ocean here. Lekube pointed to metal structures on the ceiling that looked like air-conditioning units, and large tiled panels along the walls. All of this is to stop sound escaping, he shouted over the din.

Mutriku’s location in the Bay of Biscay means waves roll in pretty much all year-round – the same reason surfers from all over the world visit the coastline from Bilbao to Biarritz. Sailors, though, have long feared the bay’s violent winter storms, which have caused numerous shipwrecks, even in recent years. However, the constant barrage that once threatened Mutriku’s ships and citizens is now a source of clean power. It also makes the Mutriku plant an ideal testing location for new marine technologies: one chamber is set up so that companies can bring their prototype turbines or generators to see how they fare in a harsh ocean setting. These experiments could help bring costs for wave technology down in the future. 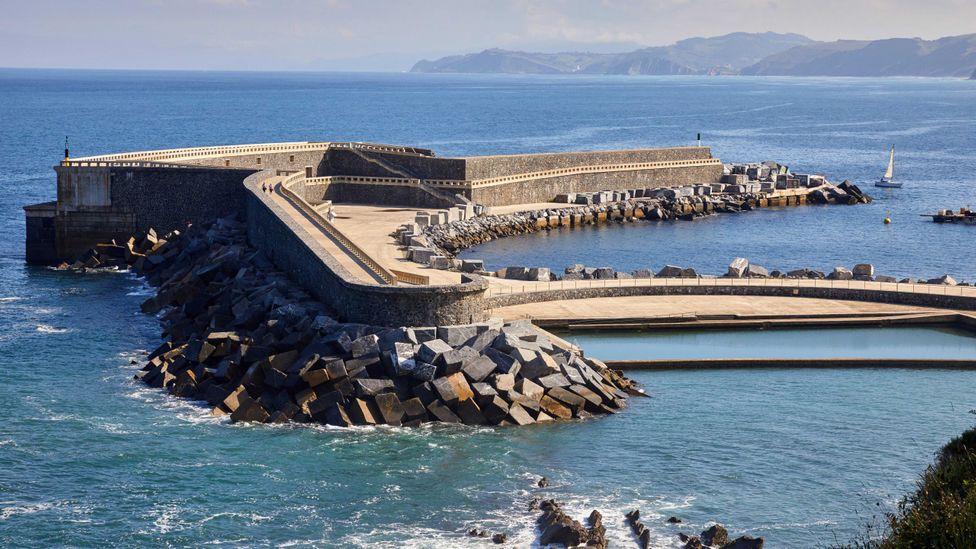 Standing back outside where we could talk, Lekube explained that the plant is a natural next step in Basque maritime history. It fits into a broader goal of the Basque government to make Basque Country a “polo de conocimiento” (a global knowledge hub) for marine renewable technology. The idea is to build on the region’s historical expertise with the ocean, drawing on generations of knowledge harboured in their universities and taking advantage of the proximity of the sea, “so that Basque companies are ultimately in the vanguard of marine energy,” he said. “Naval industry is our tradition.”

This tradition could become more valuable as Europe moves towards a greener energy mix. Currently, wave energy is still a largely untapped resource, as the technology is decades behind that of its renewable cousins, solar and wind. But estimates suggest the global potential of waves alone is enough to meet Europe’s energy demand 10 times over. Interest and investment is growing across Europe for projects that can tap into energy from the ocean, from waves and tides. “We’re still missing a lot of potential from what the water can give us,” said Lekube.

The needs of the world may have changed, but Basques have always found a way to use the sea to their advantage. In Mutriku, although industrial fishing has declined – a combination of economic pressures, and because younger generations don’t want to spend days out at sea – the link with the ocean is still very important, said Bandrés.

“The inhabitants and visitors of Mutriku enjoy the natural pools of sea water located in the port, the passion for rowing or fishing is very strong and of course they enjoy the beaches and the natural environment of the town,” she added. “The sea has been, is and will be a fundamental part of life for Mutrikuarra.” Walter Simmons
January 26, 2023
CHIANG MAI, Thailand (AP) — Just a handful of Chinese visitors were posing for photos and basking in the sun... Walter Simmons
January 20, 2023
US air safety officials say that the glitch that led to travel chaos at airports last week was actually caused... Ervine
January 17, 2023
There are several factors to think about when reserving a ticket flight for your upcoming vacation. Travel specifications such as...