MOGADISHU, Somalia (AP) — More than two dozen children have died of hunger in the past two months in a single hospital in Somalia. Dr. Yahye Abdi Garun has watched their emaciated parents stumble in from rural areas gripped by the driest drought in decades. And yet no humanitarian aid arrives.

Shortly after Russia invaded Ukraine, a donor who was preparing to give a half-million dollars to a Somali aid group told its executive director Hussein Kulmiye it was redirecting the money to help Ukrainians instead.

And now, as Somalis fleeing the drought fill more than 500 camps in the city of Baidoa, aid workers make “horrific” choices to help one camp and ignore 10 others, Norwegian Refugee Council Secretary General Jan Egeland said, telling The Associated Press he is “angry and ashamed.” His group’s Ukraine appeal was fully funded within 48 hours, but its Somalia appeal is perhaps a quarter funded as thousands of people die. 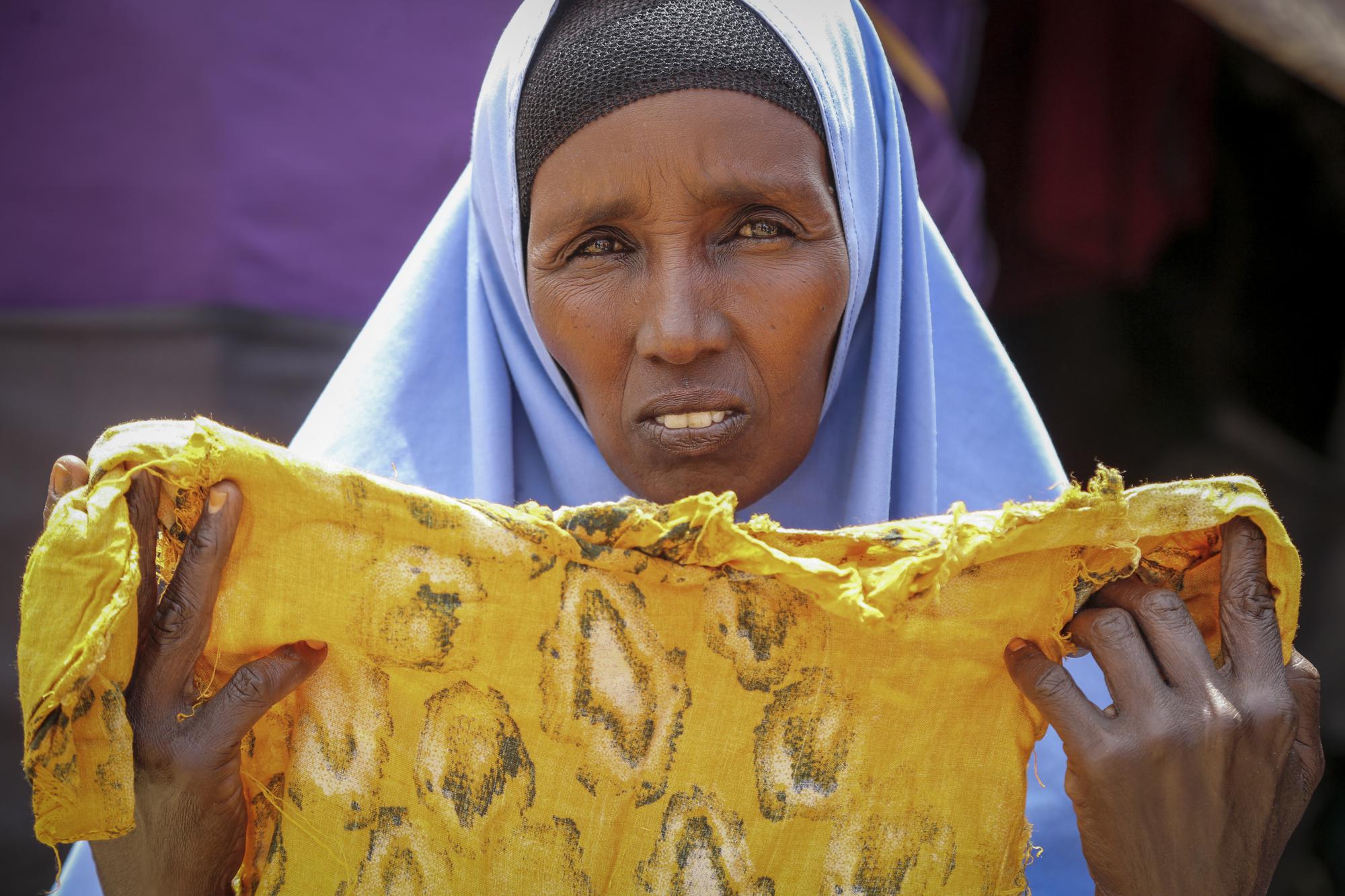 The war in Ukraine has abruptly drawn millions of dollars away from other crises. Somalia, facing a food shortage largely driven by the war, might be the most vulnerable. Its aid funding is less than half of last year’s level while overwhelmingly Western donors have sent more than $1.7 billion to respond to the war in Europe. Yemen, Syria, Iraq, South Sudan, Congo and the Palestinian territories are similarly affected.

The $2.2 billion appeal for Ukraine is almost 80% funded, according to United Nations data, an “exceptional” level for any crisis at the midway point of the year, said Angus Urquhart, humanitarian and crisis lead for the Development Initiatives consultancy. The smaller appeal for Somalia is just 30% funded.

This year’s global shift in money and attention is perhaps most urgently felt in the Horn of Africa, including Ethiopia and Kenya, where some areas could be declared in famine within weeks. The United States Agency for International Development says regional authorities haven’t seen anything on this scale in well over 100 years. Millions of livestock, families’ source of wealth and nutrition, have died.

To the shock of some exhausted Somalis who walk for days through parched landscapes to places like Mogadishu in search of aid, there is often little or none.

Hawa Osman Bilal sat outside her makeshift tent holding the clothes of her daughter Ifrah, who like many vulnerable Somalis died after the difficult journey to seek help.

“She was skinny and emaciated, and she died in front of me,” Bilal said. The girl was buried nearby, one in a growing number of tiny graves. 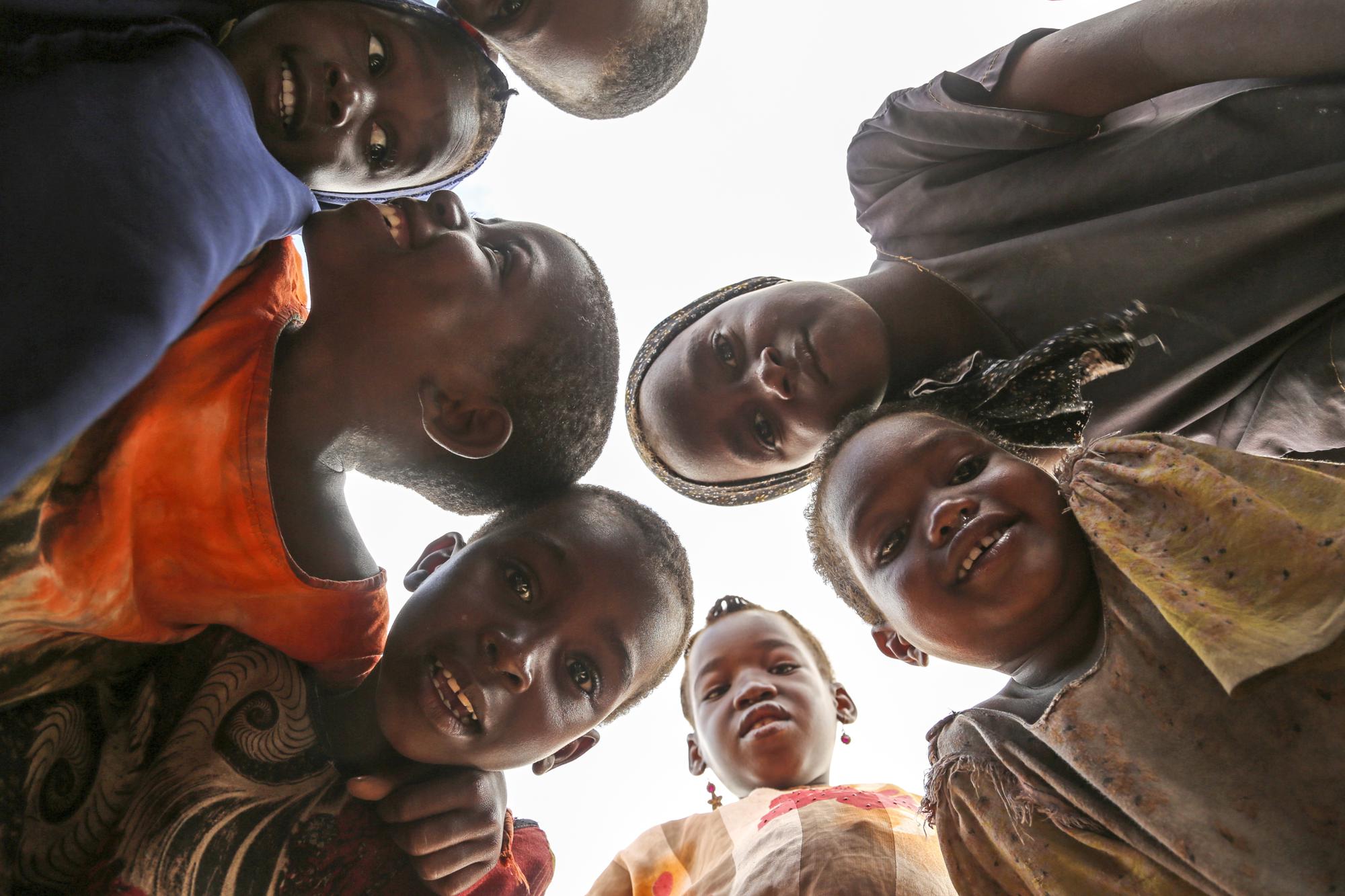 Somali children who fled drought-stricken areas play together at a makeshift camp for the displaced on the outskirts of Mogadishu, Somalia Wednesday, June 29, 2022. (AP Photo/Farah Abdi Warsameh)

The crowded camp’s caretaker, Fadumo Abdulkadir Warsame, told the AP that about 100 families had arrived in the past week alone, swelling the population to 1,700 families. There is no food to give them. “The only thing we can afford for them is bread and black tea,” he said. “There is no aid from the donors yet.”

At a nearby storeroom run by the local organization Peace and Development Action, supported by the U.N. World Food Program, the stock has shriveled. “The world has turned its back on Somalia to focus on Ukraine,” manager Shafici Ali Ahmed said.

The White House acknowledged the problem in a June 28 statement on global food security, saying that “while the entire globe will continue to be affected by Russia’s actions, the most immediate needs will present in the Horn of Africa,” where Somalia once sourced 90% of its wheat from Russia and Ukraine but now struggles to find supplies amid soaring prices. 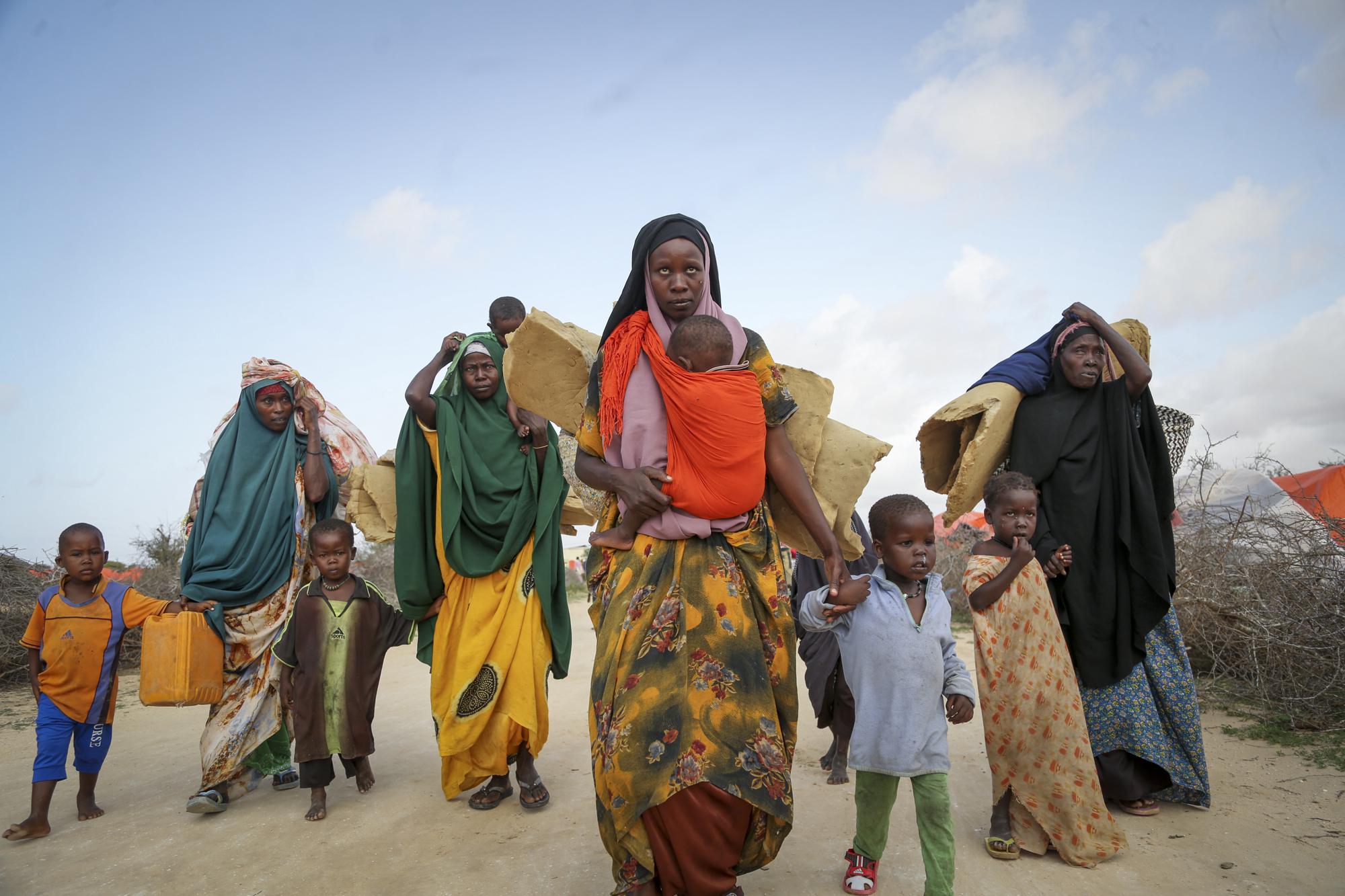 “We’re really trying to stave off mass deaths at this point,” Sarah Charles, assistant to the administrator for USAID’s Bureau for Humanitarian Assistance, told the AP, adding that “unfortunately, the nature of these crises is such that they go slow and then go very fast.”

Nimo Hassan, director of the Somalia NGO Consortium, and several others said they believe donor countries’ representatives on the ground understand the urgency, but decision-makers in capitals like Brussels and London appear distracted by the war in Europe.

“They’re not saying openly, ‘We’re focused on Ukraine,’ but you can see what they’re doing in Ukraine,” Hassan said. “It should be based on need, not a political decision, you know?”

Less than 30% of the new arrivals at camps for those fleeing drought in Somalia were receiving immediate food or other assistance as of April, the U.N. humanitarian agency has said.

“Not all emergencies are born equal,” said Victor Aguayo, the UNICEF director of nutrition and child development, speaking from the Somali region of Ethiopia, where he reported a “very significant increase” in the number of children under 2 with severe wasting. 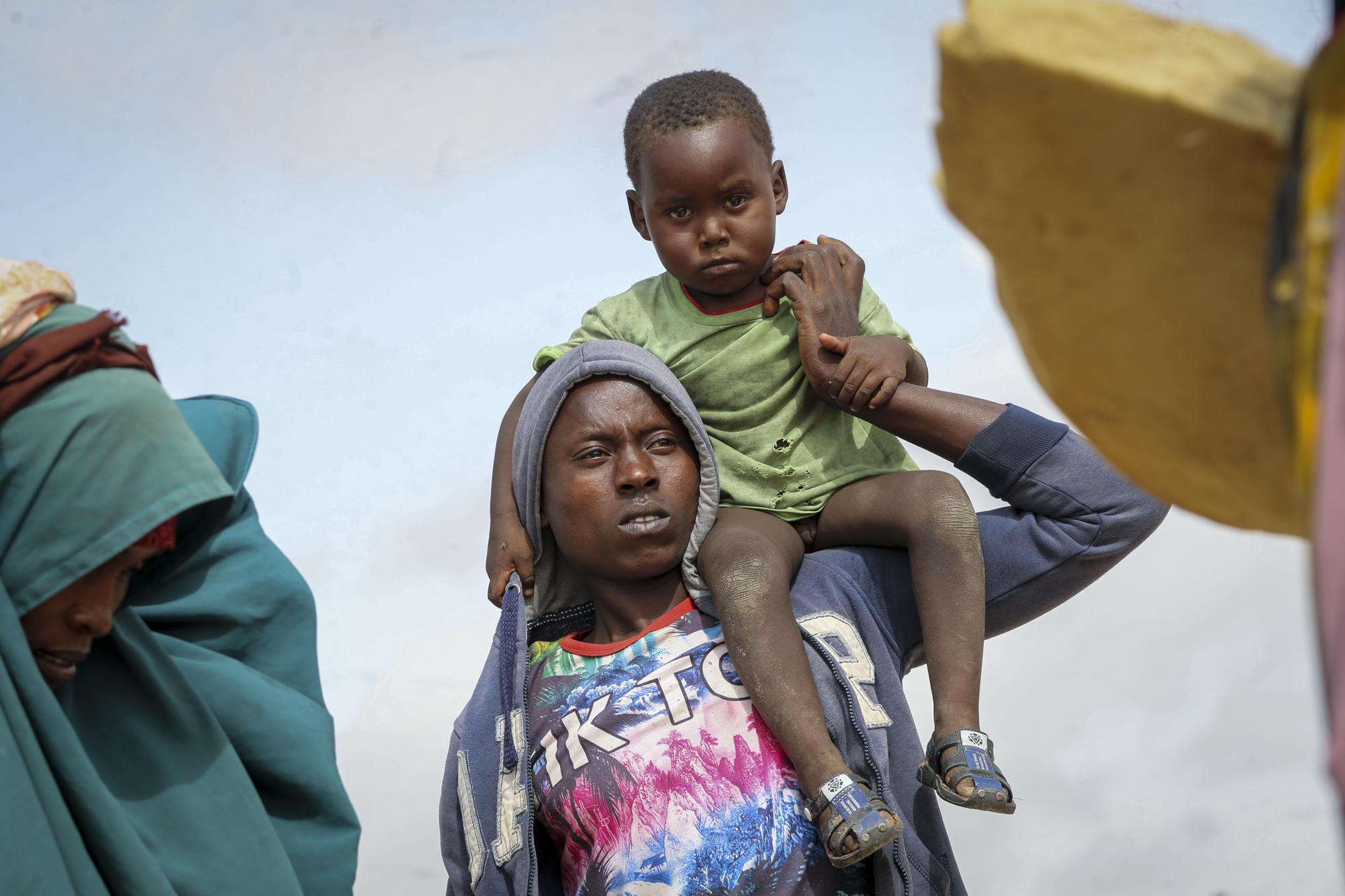 “Some emergencies all of a sudden grab the attention,” Aguayo said, adding that UNICEF is not receiving enough money to contain the Horn of Africa crisis as 1.8 million children need urgent treatment.

The World Food Program, like UNICEF, must shift limited resources from preventing acute hunger to focusing on the desperately hungry. That means more than a half-million children under 2 in Somalia have lost prevention help “at the peak of famine prevention efforts,” WFP spokesman Altan Butt said.

Across Somalia, where a weak humanitarian response to the 2010-12 drought was in part to blame as a quarter-million people died, humanitarian workers watch this one with fear as a fifth straight rainy season might fail for the first time in memory. 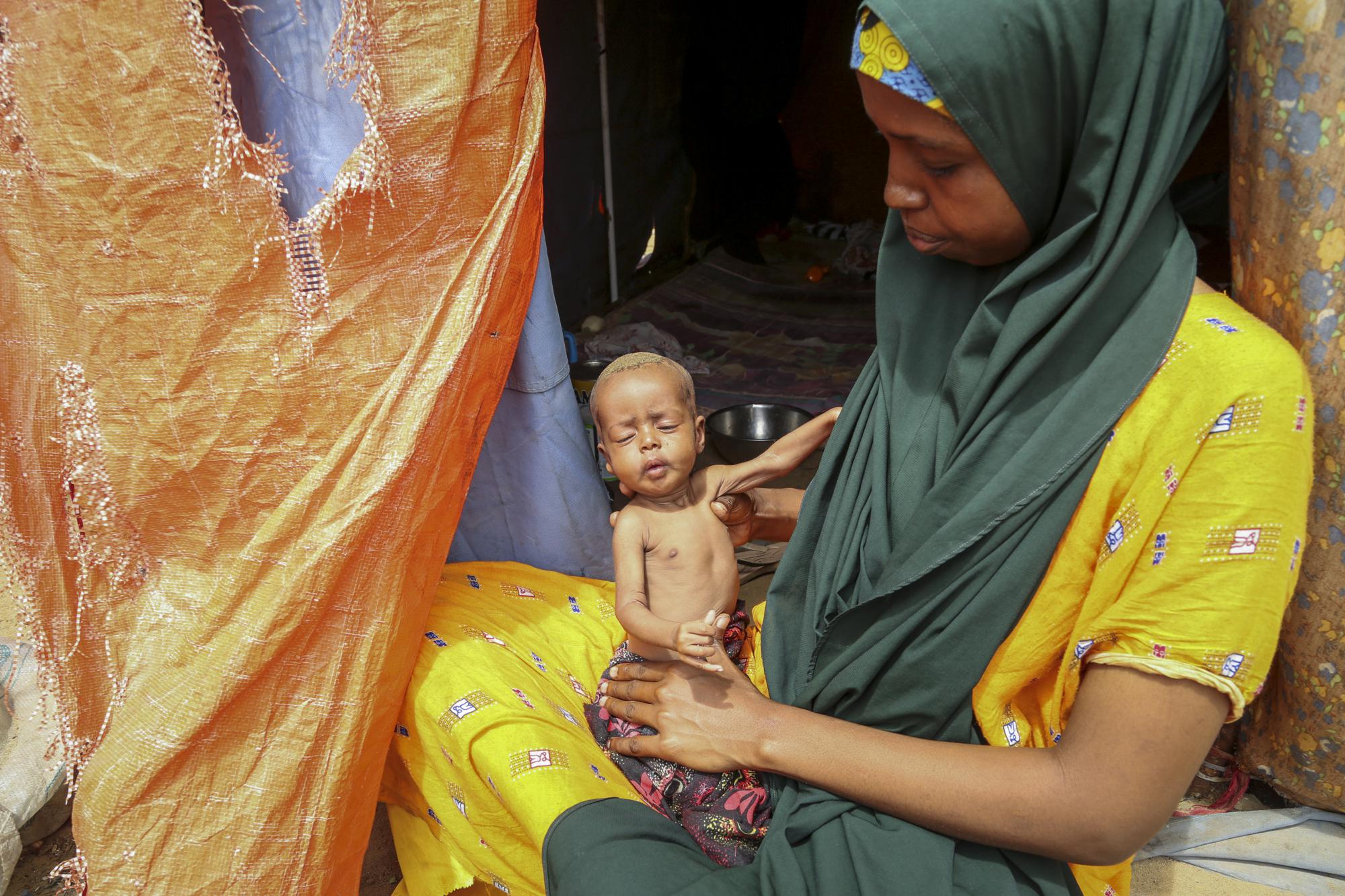 “We can see places where there’s not a drop of water,” said Ahmed Nasir, deputy director of Save Somali Women and Children, speaking to the AP from the field. “If those people in decision-making offices could see what we see now, they would just release the funds immediately.” 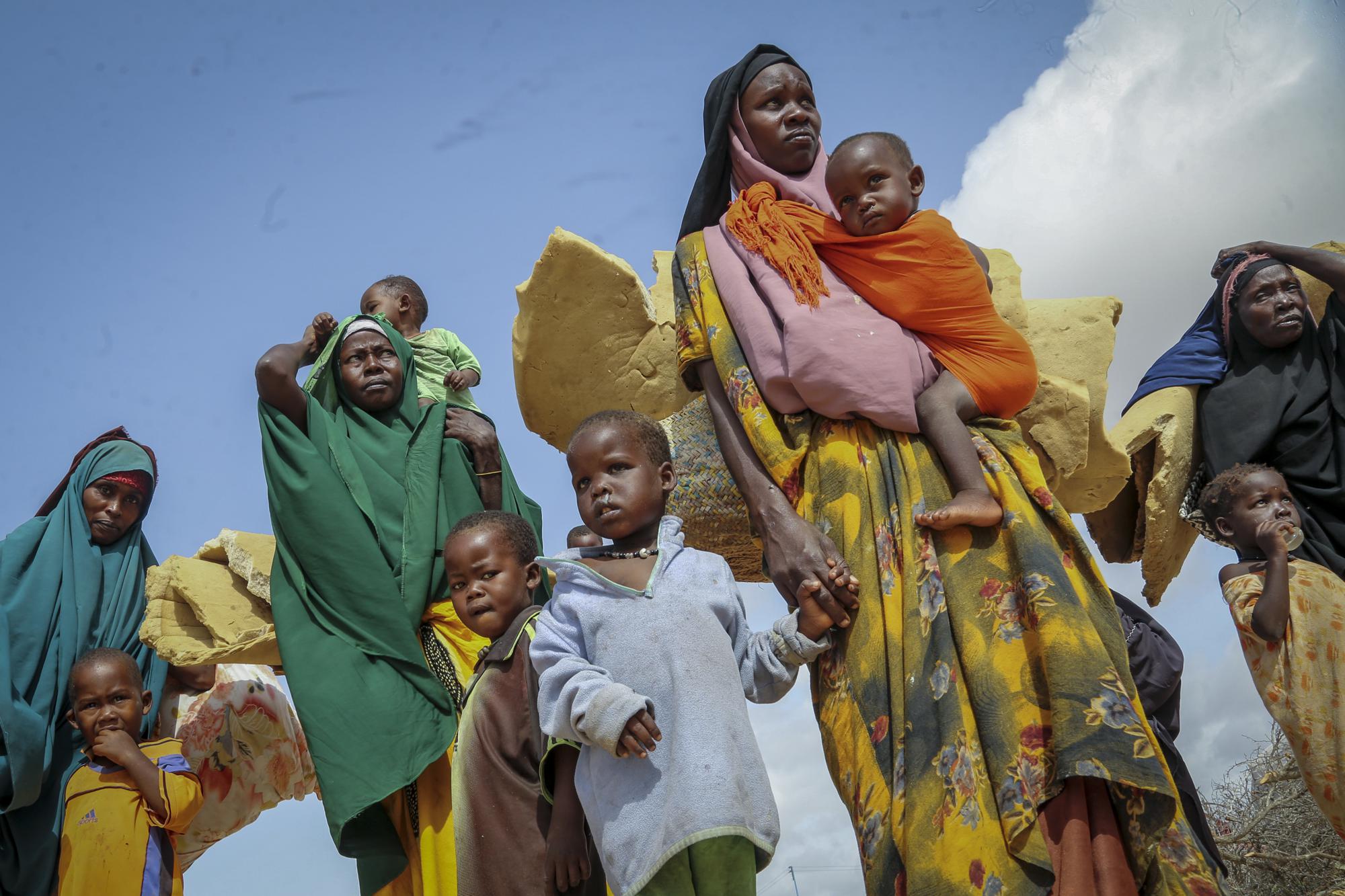